How will future astronauts survive on distant planets? NASA is developing a variety of autonomous robots to build the infrastructure before humans even get there. This capability will allow future astronauts to focus on more important projects as we explore the cosmos.

The Space Robotics Challenge focuses on developing software to increase the autonomy of mobile robots during space travel and on other planets and moons.

The Space Robotics Challenge is one of Space Center Houston’s many community science initiatives intended to inspire all generations through the wonders of space exploration. Click here to learn more about our education programs. 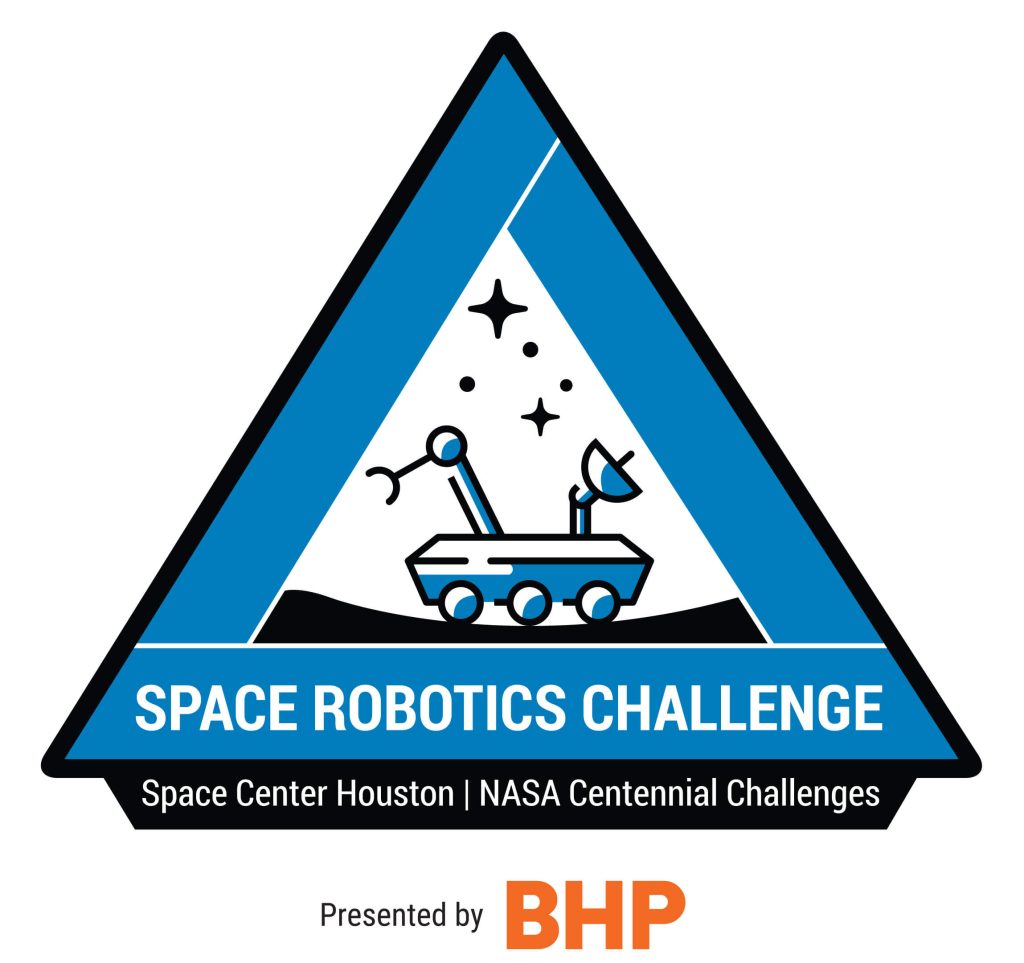 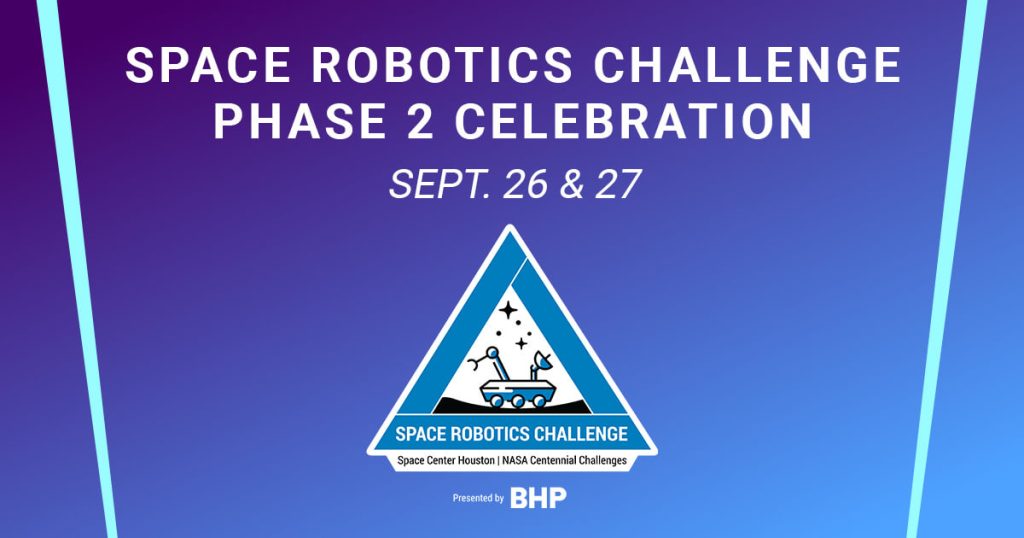 Watch a live student robotics competition, similar to a hackathon, from 1:30 – 4:30 p.m. in the main plaza.

Elementary, middle school, and high school students from the greater Houston area will put their coding skills to work to navigate a robot through a space exploration challenge. This competition features members of the Finalist teams from the NASA Space Robotics Challenge mentoring a team of students to develop code for their robots to complete tasks on a giant lunar map.

For the first time at Space Center Houston, test out the new Sphero RVR Programmable Robots. Operate these all-terrain, customizable robotic rovers on our robotics field.

The celebration concludes with the long-awaited award ceremony announcing the winners of the NASA Space Robotics Challenge Phase 2 in the Mission Briefing Center 2-3 p.m.

During the ceremony, hear from a variety of speakers about the importance of partnerships and collaboration to inspire innovation, and learn about the goal of the challenge and what NASA hopes to gain from Monsi Roman, NASA Centennial Challenges Program Manager.

Activities are included in general admission. Get your tickets today!

Note: Activities are subject to change.

Get to know the Space Robotics Challenges Phase 2 finalist teams below.

AMI Technologies LLC
Edina, Minnesota
AMI Technologies, LLC is a single person team. My educational background consists of a Bachelor’s in mechanical engineering and Master of Science in electrical engineering. I have around 30 years of industry experience in the area of automation and robotics developing software algorithms, mechanical design, and working with optics and electronics. I have been involved in semiconductor capital equipment, material testing, disk drives, and ultra-high vacuum. I hold patents related to image processing algorithms, precision machine design, and machine vision. I am the coauthor of IEEE publication (related to autonomous vehicles). ROS, Gazebo, Docker, and Linux were all new to me at the start of the contest.

God and Golem, Inc.
Irvine, California
Bradley C has more than 10 years of experience in software development, having completed in AI challenges ranging from NLP chatbots to DL classification and autonomous ROS bots!

Lycanthropic Lunar Lunatics (L3)
Tokyo, Japan
Our team, currently based in Japan, consists of aerospace and software professionals. We all met while previously working together on rover development at ispace, a Japanese lunar transportation company. Our members also have experience with Mars rover development, satellite image analysis, and machine learning.

Mingo Mountain Robotics
Kettle Falls, Washington
I was part of the Space Robotics Challenge Phase 1. It was a crazy amount of work, and I loved every minute of it. I can’t help myself. I mentor a First Robotics Competition (FRC) high school robotics team and help students create their competition robots each year. Localization will be the biggest challenge of this competition, and I have some ideas on solving that problem.

Mountaineers
Morgantown, West Virgina
Team Mountaineers is a group of robotics students and faculty from the Statler College of Engineering and Mineral Resources at West Virginia University (WVU). Our team goal is to strengthen WVU’s robotics program through our participation. In doing this, our team objectives are to develop a new group of diverse robotics leaders at WVU and to capture the knowledge acquired during our participation in shareable manner for the benefit of WVU robotics and the outside world. Let’s go Mountaineers!

Olympus Mons
Bareclona, Spain
The team is composed of PAL Robotics’ employees, who have chosen to spend some of their weekends, holidays, and nights participating in the competition. Our goal is to apply our day-to-day work to the competition robots, to learn and try new things that can improve our company robots and to have fun while doing it.The team was created for participating in the Space Robotics Challenge Phase 1, which we finished in third place. We’re looking forward to improving our result this year!

PRIME
Houston, Texas
I live in Houston, and am currently attending the University of Houston as a computer science major. I build robots and love 3-D printing. I’ve been interested in robotics and automation since high school. As a freshman in college, I participated in Phase 1 of the Space Robotics Challenge. As a sophomore, I participated in the SpaceX Hyperloop Competition for two years. In parallel, I constructed a massive room-sized 3-D printer and recently have consolidated my efforts towards the ANA Avatar XPrize, a four-year competition for the creation of humanoid robotic avatars.

Purdue-Hongik Team
West Lafayette, Indiana, & Sejong, Chungcheongnam-do, South Korea
The Purdue-Hongik Team is an international collaborative team formed by the research group of Dr. Byung-Cheol Min at Purdue University (SMART Lab) and the research group of Dr. Jonghoek Kim at Hongik University in South Korea. The two research groups have been collaborating for a long time on the topic of robotics and multi-robot systems. Our mission is to disseminate to society through this competition the theoretical and practical knowledge and skills in multi-robot systems that have been built up through our collaboration, and to further advance new robotic technologies suitable for the space environment.

Robotika
Annapolis, Maryland
Team members are seasoned IT professionals, computer scientists, and robotics enthusiasts. We’ve drawn on our deep experience conceiving, designing, and testing autonomous Earth-bound vehicles in our work for the competition.

Runaround Robotics
Cedar Falls, Iowa & Colombo, Sri Lanka
Robotics and software specialists representing the USA and Sri Lanka make up this team, named after the science fiction short story “Runaround” by Isaac Asimov. Runaround Robotics team is confident that its expertise in software perception, planning, and implementation is well-suited to complete the challenge tasks. The main goal of the team is to learn about and actively contribute to the exciting field of autonomous robotics in both terrestrial and outer space applications.

Team MoonrAIders
Johnstown, Colorado (remote team)
Our team is made up of interdisciplinary members coming from fields such as machine learning, computer vision, and robotics. We have members from over seven countries and nine institutions. Together we are excited to tackle the challenge of developing simulated rovers to find resources on the Moon. Our team is proudly supported by SAP National Security Services (SAP NS2) Labs.

Team Olrun
Evansville, Indiana
The name Olrun was inspired by Space Robotics Challenge Phase 1, where the robot was named Valkyrie. Olrun is one of the Valkyries in Norse mythology. I am back as a one-person team.

Team Schmidty
Bridgeville, Pennsylvania
I am a mechanical engineer by degree but software engineer by trade specializing in robotics currently for the National Robotics Engineering Center at Carnegie Mellon University. In particular, I have a lot of experience working with GNC, communications, and middleware. C++, C#, and Python are my primary areas of expertise, but I also have extensive web and database experience. I have always enjoyed the challenge of the highly technical problems in science and technology, and stretching my skills to solve such problems.

Team Swarmathon
Albuquerque, New Mexico
We were brought together by a previous NASA robotics competition and decided to continue our connection by entering this challenge. We have members from the University of New Mexico and Cabrillo College. We are mostly computer science undergraduates and graduate students.

Team Whalers
Nantucket, Massachusetts
Team Whalers started as a four-person boy band covering hits from the greatest R&B vocal group of all time, Boyz II Men. After several failed performances and dramatic fallout, only Jed and Will remained. Widely considered the least talented singers of the group, they fell back onto their expertise in robotics. Will is a talented software engineer and physicist. Jed is also on the team.

The Luminosity Lab
Tempe, Arizona
The Luminosity Lab at Arizona State University (ASU) is an interdisciplinary research and development lab driven by hand-selected teams of high-performing students from ASU who design, build, and deploy novel solutions to address some of the world’s most pressing challenges. Built on a “Skunkworks” model of innovation, we take risks, strategically leverage the resources and experts of a Research I university, and produce unconventional innovations capable of impacting society.

UHCL-SJC
Houston, Texas
We are a team of undergraduate students from the University of Houston Clear Lake and San Jacinto College North.

Walk Softly
Niskayuna, New York
Team Walk Softly joins the fray from upstate New York. Team members Steve Gray and Shiraj Sen are coworkers at GE Global Research who are competing here on their own time. Between them, they have competed in the DARPA ARM-S, DARPA Robotics Challenge, DARPA Subterranean Challenge, and NIST ARIAC competitions. As always, Walk Softly is excited to see the innovative solutions that come out of this challenge.