Play Video about Falcon 9’s first stage is equipped with hypersonic grid fins that manipulate the direction of the stage’s lift during reentry. The fins are placed in an X-wing configuration and are stowed on ascent and deployed during reentry. Courtesy of Space Center Houston

Rocket at a Glance 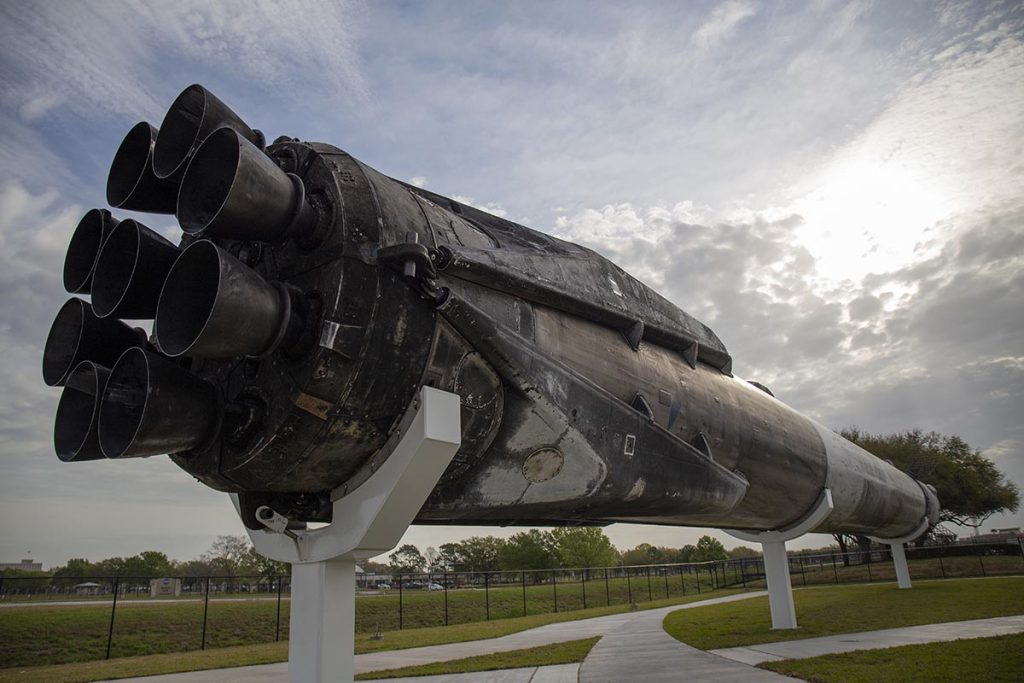 The Space Shuttle Program brought reusable spacecraft into reality. By creating a craft that could be relaunched quickly, NASA made traveling to space more accessible and led to the creation of things like the International Space Station (ISS).

SpaceX continues this tradition with its reusable rocket program. As part of its Falcon 9 rocket series, SpaceX has proven it can launch, land and reuse a stage of a rocket.

The future of space travel is reusable rockets. Thanks to the generosity of SpaceX, get an up-close look at that future for yourself.

In our newest exhibit, the Falcon 9 core, or first stage, B1035 is displayed horizontally and elevated 14 feet off the ground near Independence Plaza.

It’s one of only two SpaceX Falcon 9 boosters on display and the first commercial space exhibit for Space Center Houston. Walk underneath this marvel of reusable space technology and learn more about how it is making space more accessible.

The core itself is about 47.7 meters tall, 3.1 meters in diameter. Its nine engines Merlin 1D help it lift payloads into space and land the core safely on the ground. Together with a second stage, it’s known as the Falcon 9 v1.2 (Block 3).

The core is equipped with extendable landing legs that deploy as the core gets closer to the ground. As it approaches its landing target, two retro burns are performed to ease the rocket into a safe landing.

Our newest addition launched as part of two NASA missions. The first, CRS-11, was a resupply mission to ISS. This core acted as the first stage of the Falcon 9 rocket that propelled a Dragon spacecraft into orbit.

CRS stands for Commercial Resupply Service and is part of NASA’s contract with SpaceX to provide U.S.-based supply launches to ISS. This mission launched June 3, 2017 and was the first time a Dragon spacecraft was reused.

B1035 flew again Dec. 15, 2017, marking the first time NASA allowed a reusable rocket stage to be reflown for one of its missions. SpaceX had previously reflown a booster, but for private company launches.

It was also the first time a reflown core landed at LZ-1, the landing zone at Cape Canaveral. All previous previously flown stage landings were done on SpaceX’s automated drone ships.

After this second mission, B1035 was retired.

This marvel of modern technology is now open and included in general admission.