Space Center Houston is home to one of the world’s most comprehensive collections of astronaut apparel and spacesuits. See a diverse collection of spacesuits used for everything from training flights to spacewalks on the Moon. 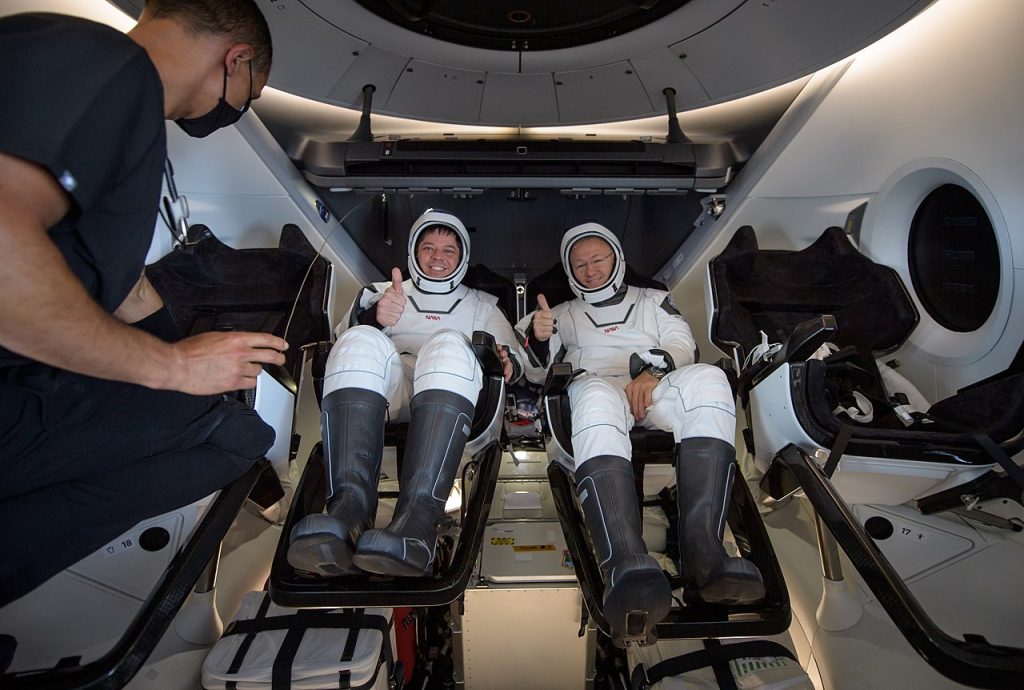 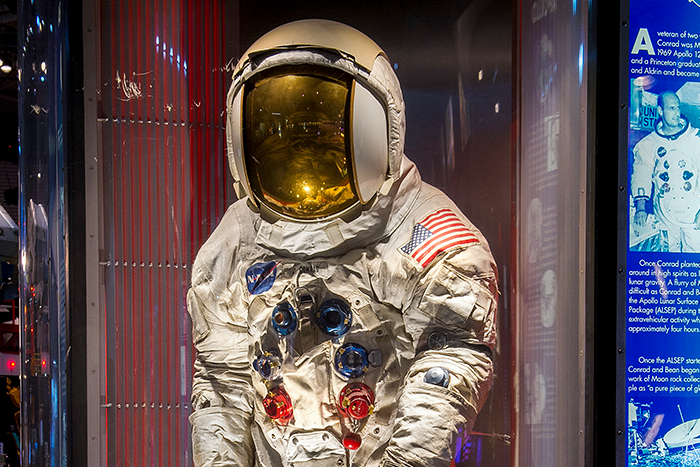 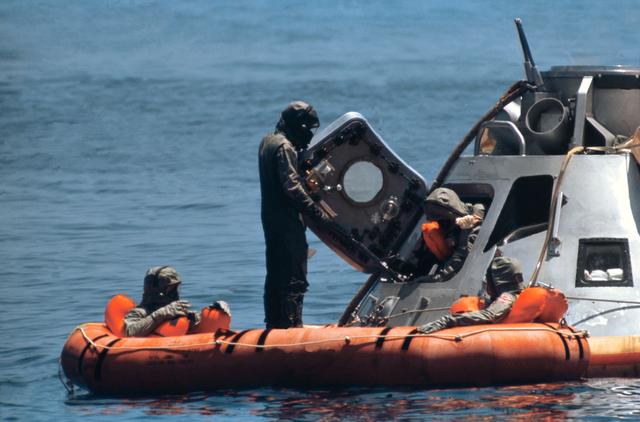 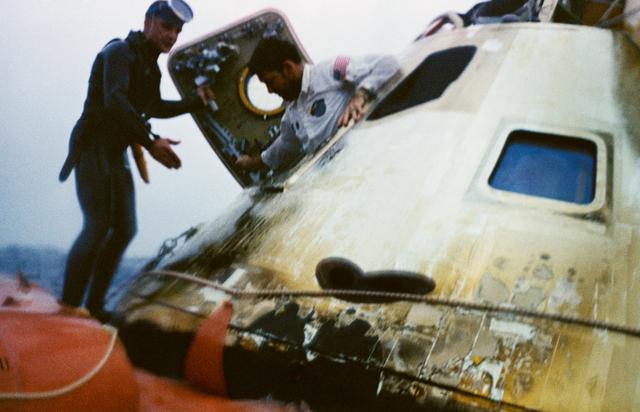 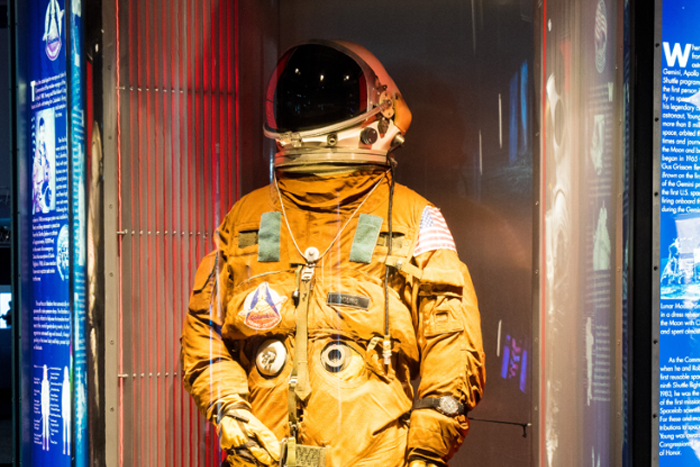 More History to Explore in Our Collection

Resnik became the second American woman and first Jewish American to enter space aboard the maiden voyage of the shuttle orbiter Discovery on Aug. 30, 1984 as a mission specialist.

She and her crewmates conducted many experiments and deployed three satellites, drawing expertise from her doctorate in electrical engineering and extensive training.

Tragically, Resnik’s second trip into orbit was set to be on STS-51-L aboard the Challenger. Resnik and the rest of the crew were lost when the shuttle exploded shortly after takeoff.

Resnik’s inspirational words still resonate. “Astronauts don’t have to be either very feminine or very masculine women or very superhuman males, or any color or anything,” Resnik said in 1979 while training for the astronaut corps. “It’s about people in space.”

Space Center Houston honors her and the fallen crew of Challenger by memorializing her T-38 flight training suit in our comprehensive collection.

This was the last NASA garment she wore before the accident. 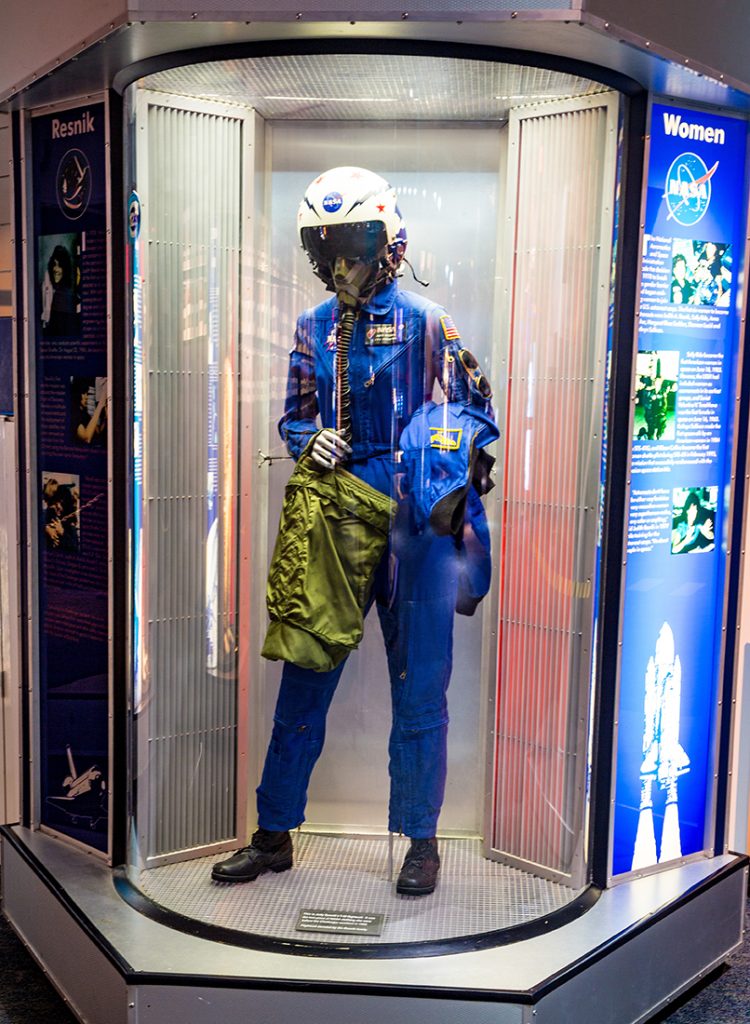 On her first of two missions, Ride helped mobilize two different satellites in her role as mission specialist. She was responsible for the 50-foot remote manipulator arm used to maneuver payloads in and out of the shuttle’s cargo bay.

In our spacesuit collection, see a pair of in-flight coveralls similar to ones worn by Ride to commemorate her historic contribution to space exploration.

Like most astronauts, these coveralls are very versatile. With a variety of pockets useful for storing necessary flight items such as tools, these coveralls were practical in the weightlessness of microgravity.

Ride’s first spaceflight was on space shuttle Challenger in 1983. The reusable design of the Space Shuttle enabled NASA to promote an egalitarian approach to its astronaut selection. No longer was it required for an astronaut to be a pilot or military-trained. Qualified scientists, engineers, teachers, and dreamers had the same opportunity to soar into the sky like Ride.

Following her time as an astronaut, Dr. Ride pursued her long-time passion of motivating girls and young women to seek science, math, engineering and technology (STEM) careers. She continued to advocate for science education and published many children’s books about science.

With a doctorate from Stanford University, Ride was a respected scientist and lover of Shakespeare, and an accomplished athlete. Every young girl who walks through Space Center Houston can see Ride’s shuttle apparel and know they, too, can one day ride among the stars. 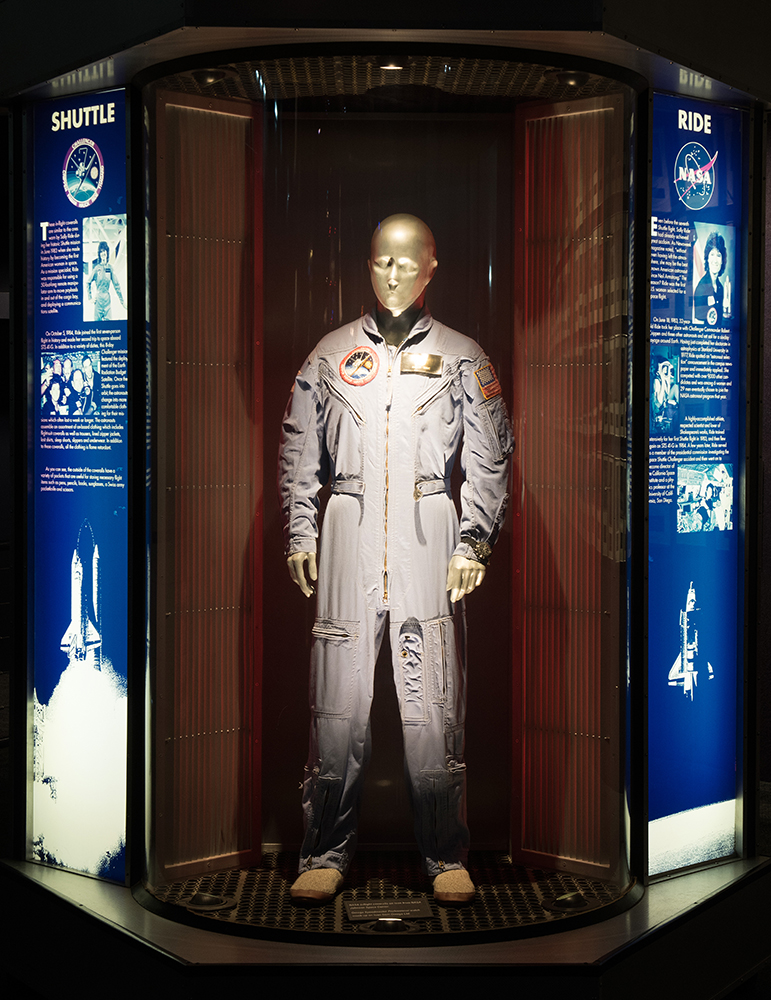 An accomplished Air Force Major and B-52 pilot, Donald “Deke” Slayton was slated to be the fourth man to go into space as part of NASA’s Mercury program.

Just weeks before his mission, an irregular heartbeat grounded Slayton.

He took on other NASA roles such as Coordinator of Astronaut Activities and Director of Flight Crew Operations. Obtaining the unofficial title of “chief astronaut,” he had a decisive role is selecting incoming crews for the Gemini and Apollo programs, including the decision of who would be the first person on the Moon.

Never giving up on his dream, Slayton returned to full flight status after numerous comprehensive medical reviews which confirmed his health.

Deke Slayton made his first spaceflight as an Apollo docking module pilot of the Apollo-Soyuz test project (ASTP). It was the historic first meeting in space between American astronauts and Soviet cosmonauts.

See Slayton’s flight certified pressure suit (A7 LB ASTP), which was always ready to fly into space if needed. His spacesuit was designed as an intravehicular suit, since no spacewalks were planned for the Apollo-Soyuz mission.

Slayton made history in more ways than one, because, at the age of 51 he was the oldest astronaut at the time to enter space, 16 years after the potentially career-ending diagnosis.

On loan from the National Air and Space Museum. 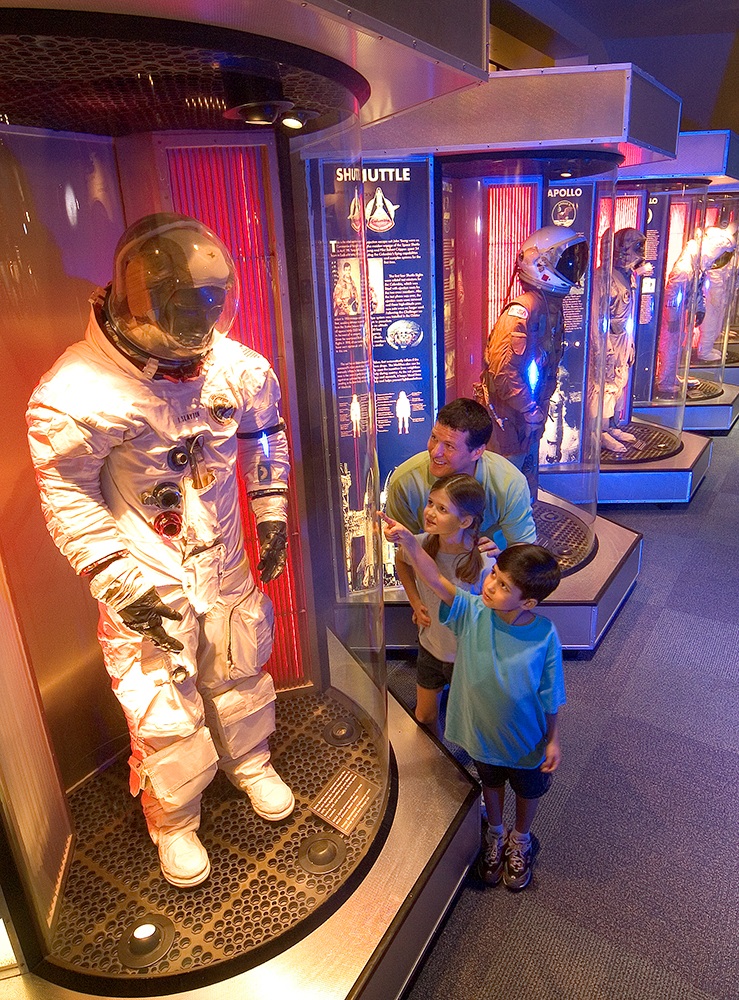 When astronaut and Earth scientist Kathryn Sullivan became the first American woman to accomplish a spacewalk, she wore an Extravehicular-Mobility Unit (EMU) like this one.

Much like a “mini spacecraft,” the EMU provided pressure, thermal protection, oxygen, cooling water, drinking water, food, waste collection, electrical power and communications for a spacewalking astronaut. These suits were designed to be reused, so they can fit different builds.

Sullivan was the third American woman in space and her first mission, STS-41G aboard the space shuttle Challenger, was the first NASA flight to include two female astronauts.

Sullivan’s second mission was no less historic. She flew aboard Discovery as mission specialist for the STS-31 mission, which deployed the Hubble Space Telescope.

On April 25, 1990, Sullivan helped deploy the telescope, which was one of the most productive scientific instruments ever built. It has made more than 1.3 million observations since the mission began and Hubble data has been published in more than 15,000 scientific studies.

Sullivan flew on three missions in her career as an astronaut, the last being STS-45 aboard the shuttle Atlantis. 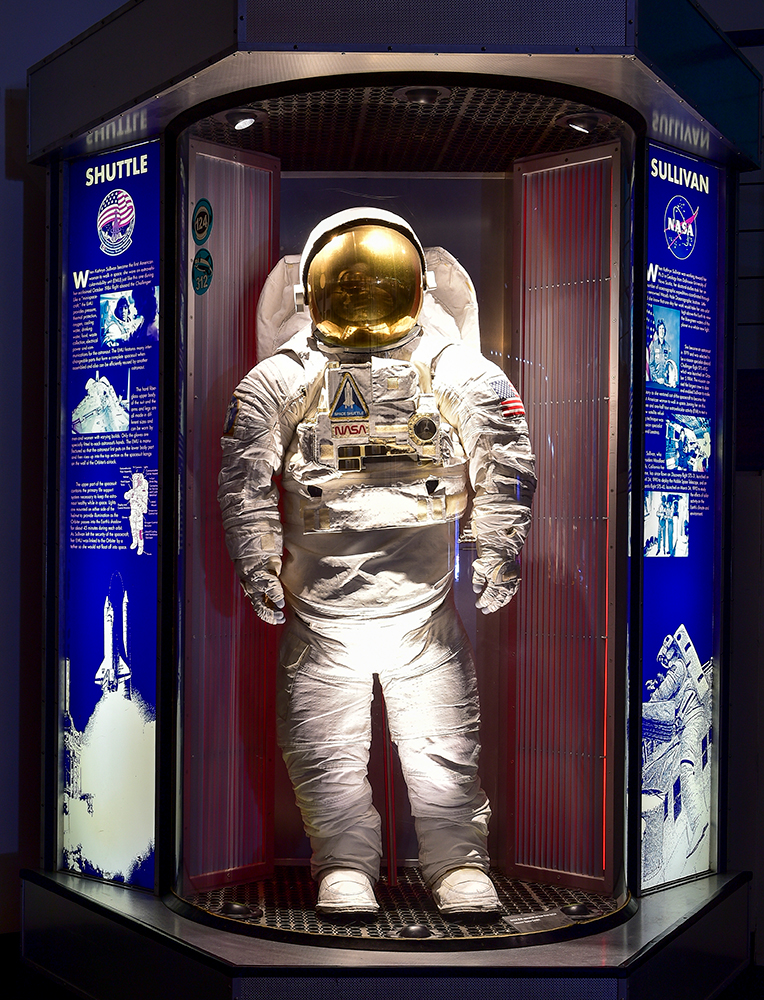 Weitz was a part of the three-person crew assigned to the first crewed mission to Skylab, America’s first space station. He wore this cooling garment under his spacesuit to keep his body cool.

Chilled water was circulated through an intricate network of tubes incorporated into the suit’s stretchable fabric.

This came in handy when Weitz had to perform an emergency task, which required leaning out of the spacecraft into space, to untangle a solar array that dislodged during launch.

It was a challenging first day in space, but his suit kept him cool and comfortable while he and the crew worked to make all the necessary repairs.

Similar suits were worn by Apollo astronauts on the lunar surface and cooling garments underneath astronaut suits continue to be used today to prevent overheating during spacewalks. 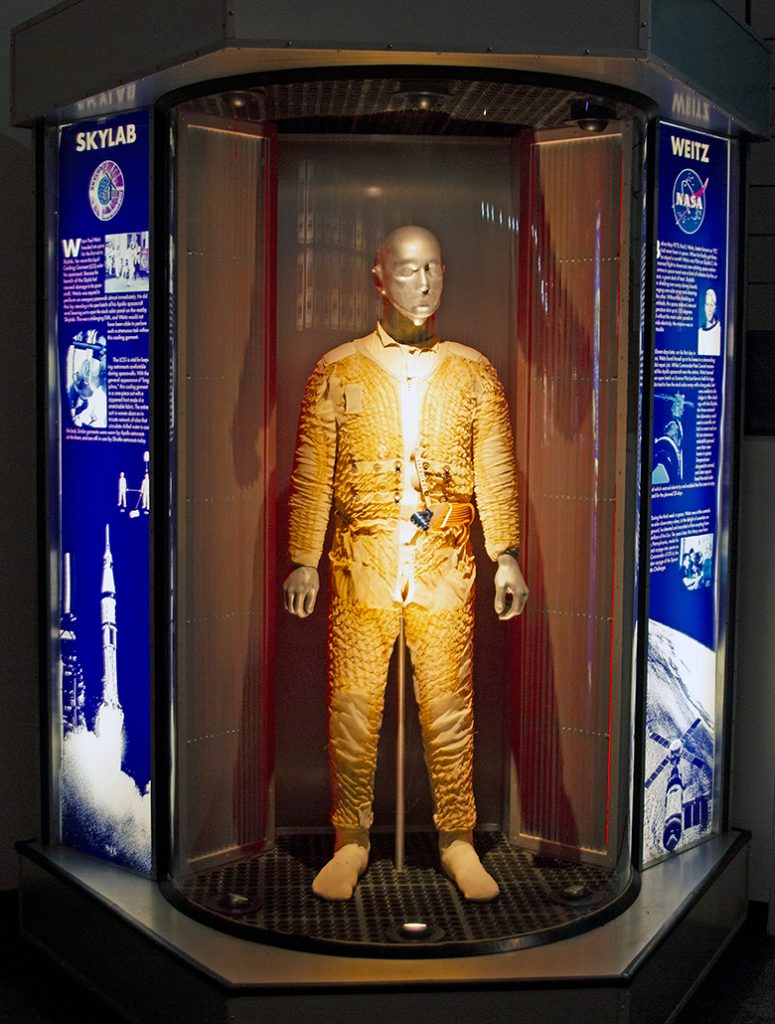 NASA is designing an entirely new generation of spacesuits to combat the challenges of longer and more demanding spaceflight expeditions.

These new suits may one day help astronauts build and maintain space stations, lunar bases or even a Mars base.

The prototype MK-3 is an exciting example of a hard suit designed for increased range of motion and flexibility, which are important factors to consider for future space exploration missions.

The MK-3 design tested a system to eliminate the need for the “pre-breathing” process utilized by shuttle-era astronauts, which was used to regulate nitrogen in the bloodstream and allow the body time to adapt to pressure differences between the cabin and spacesuit. 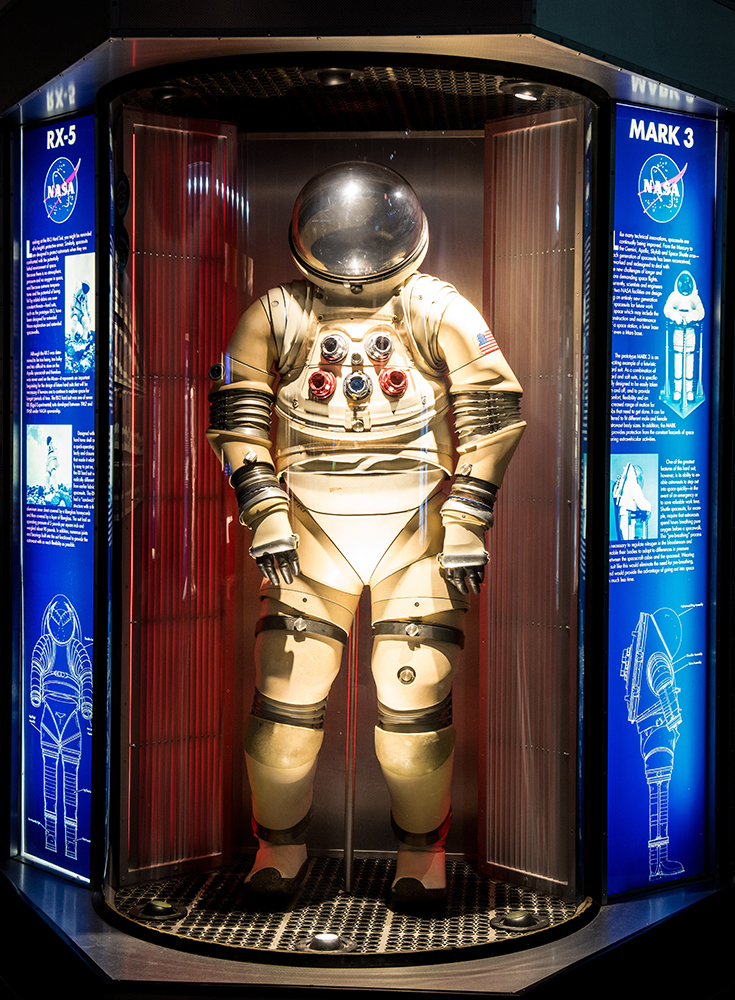 Space Center Houston recognizes every NASA astronaut who has flown in space with portraits and crew photos of each mission. From Alan Shepard and Sally Ride to the present-day heroes on the International Space Station, these space explorers are pushing the boundaries of science and technology.