Independence Plaza presented by Boeing is an international landmark, offering an experience like nothing else in the world. Visitors can enter the shuttle replica Independence, mounted on top of the historic and original NASA 905 shuttle carrier aircraft, and then explore the giant plane.

It is the only shuttle mounted on an SCA that the public can go inside.

Multiple exhibits grant a rare glimpse into the historic shuttle era and describe its impact on current and future exploration.

Play Video about The nonprofit Space Center Houston is the home of the one-of-a-kind Independence Plaza. It’s the only place in the world you can enter a shuttle replica mounted atop of the historic shuttle carrier aircraft, NASA 905. Photo courtesy of Space Center Houston.

Independence Plaza shares an important trait with other awe-inspiring landmarks like Mount Rushmore. One can’t help but notice the sheer size of it all.

The one-of-a-kind experience is offered at no extra charge as part of the general admission ticket. 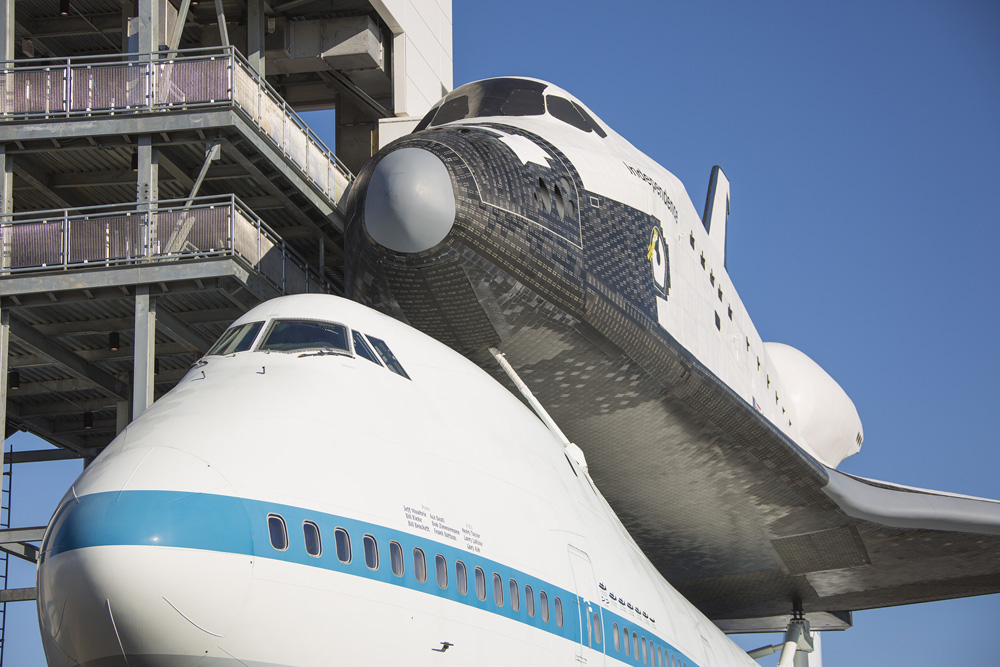 Driving up to Space Center Houston, guests immediately see the 240-ton complex standing beside the center. This foundation supports the 159-ton shuttle carrier aircraft NASA 905, the 80-ton shuttle replica Independence and a six-story tower that are used to enter both vehicles, as well as the exhibits inside NASA 905.

Begin your journey through the shuttle era by taking the elevator to the top of Independence Plaza to explore the shuttle replica Independence. The first stop is the flight deck, where you will see how the astronauts piloted the orbiter during missions.

One floor down, experience how cramped living conditions were on the mid-deck and walk out into the payload bay to see an actual flown artifact from STS-49, a satellite rescue mission in which three people from the same spacecraft walked in space at the same time. 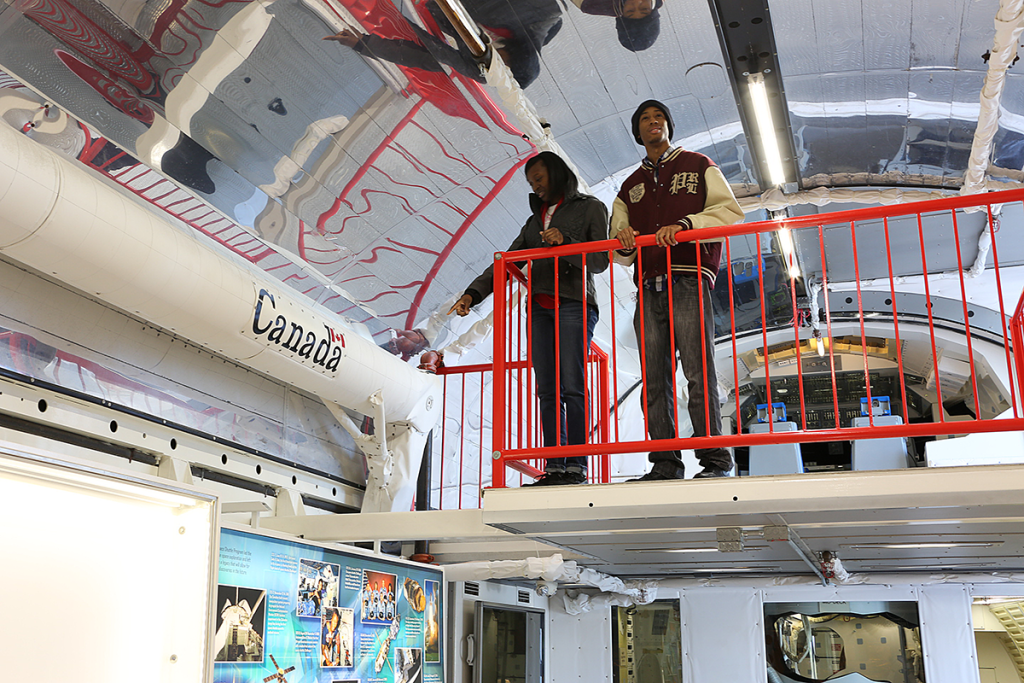 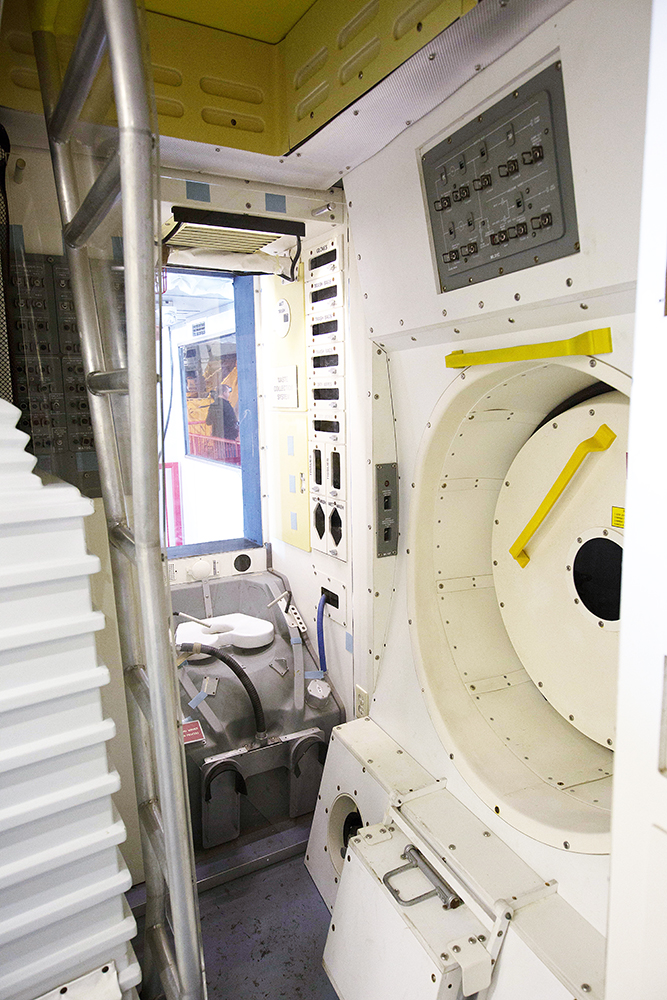 Begin your journey through the shuttle era by taking the elevator to the top of Independence Plaza to explore the shuttle replica Independence. The first stop is the flight deck, where you will see how the astronauts piloted the orbiter during missions.

One floor down, experience how cramped living conditions were on the mid-deck and walk out into the payload bay to see an actual flown artifact from STS-49, a satellite rescue mission in which three people from the same spacecraft walked in space at the same time. 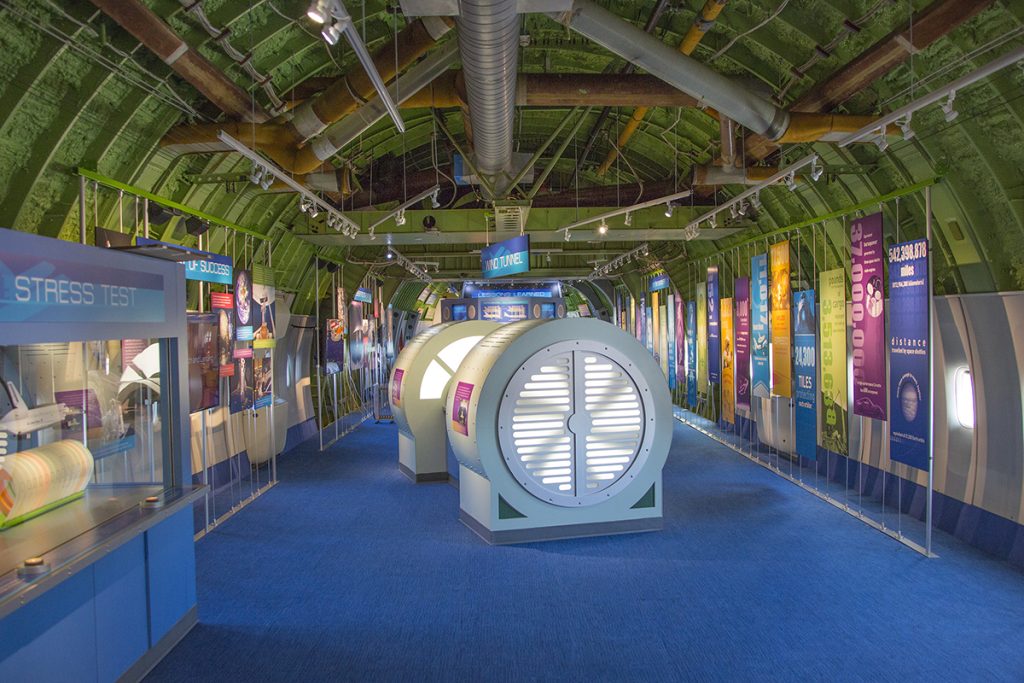 This is the actual gantry arm from Kennedy space center launch pad 39B.

It was removed in 2009 as that complex was cleared of its towers to support NASA’s future Space Launch System (SLS) heavy-lift rocket.

The end of the access arm features an environmentally clean room (“white room”) that mated with the shuttle orbiter and holds six people. The arm remained in the extended position until seven minutes, 24 seconds before launch to serve as an emergency escape route for the flight crew—that’s why the arrows point away from the direction of the orbiter. 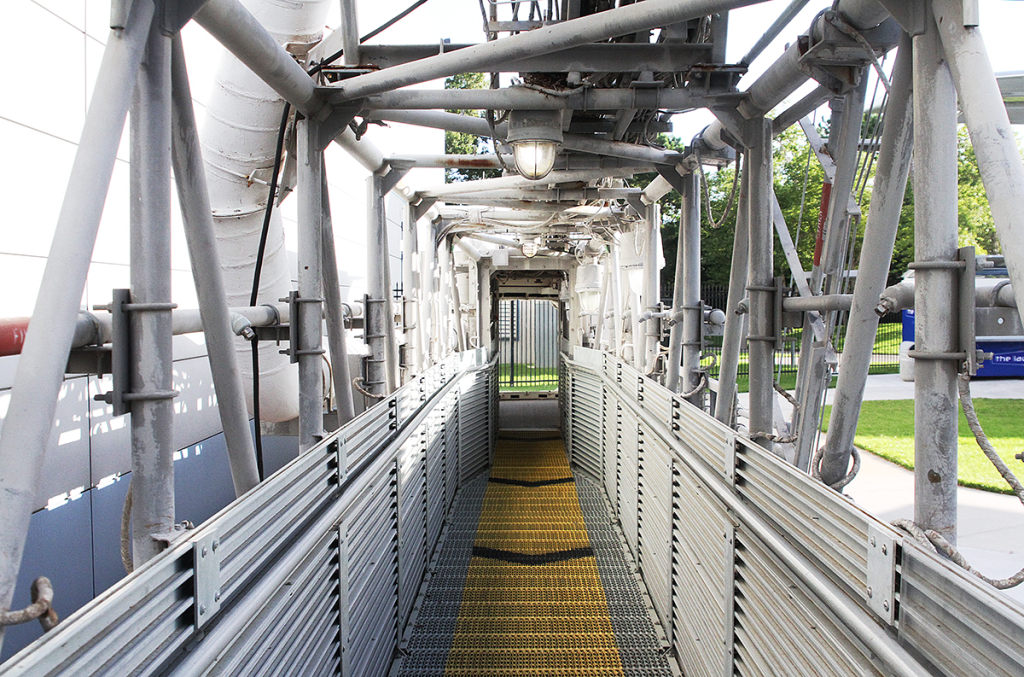 Every human mission NASA has flown since Gemini V has its own patch, created by the astronauts venturing into space.

Independence Plaza also has a unique mission patch and logo. The design reflects the remarkable ingenuity and achievement of the Space Shuttle Program and the innovators who conceived of the plan to ferry shuttles on the back of a 747.

The logo has a patriotic flair, with a flag behind NASA 905 and the shuttle replica Independence. On that flag are five grouped stars to denote the orbiters that flew into space and one single star to represent Enterprise, the orbiter that proved our Boeing 747 could carry a shuttle. 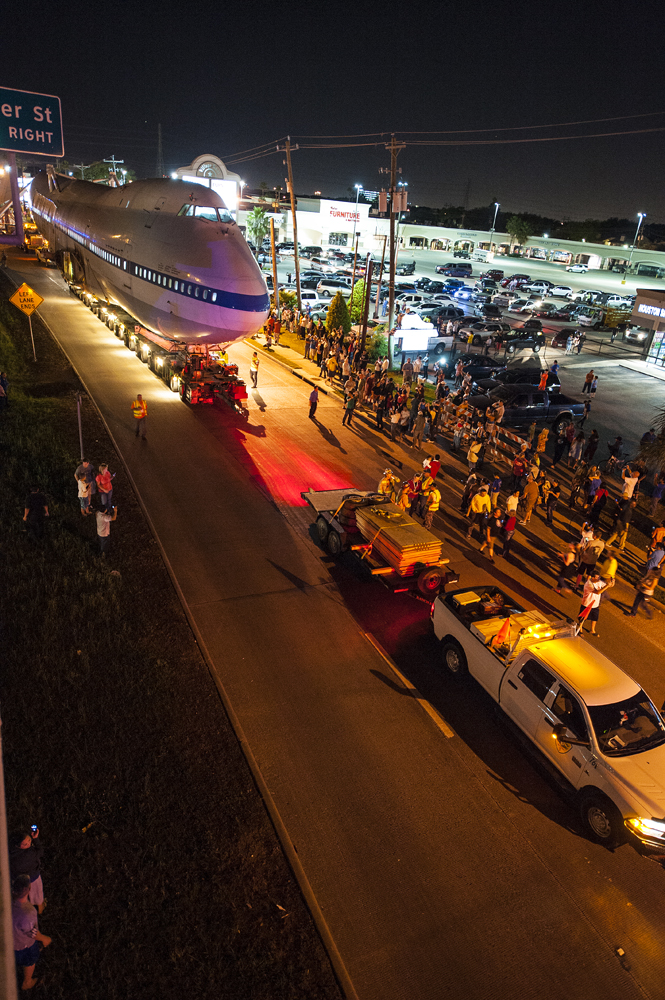 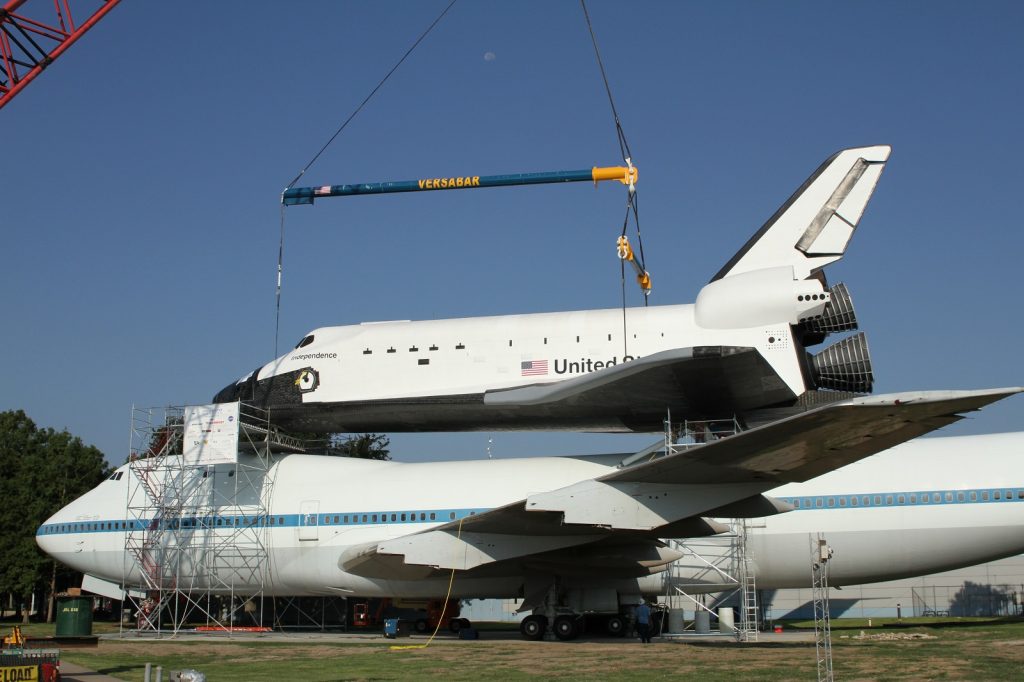 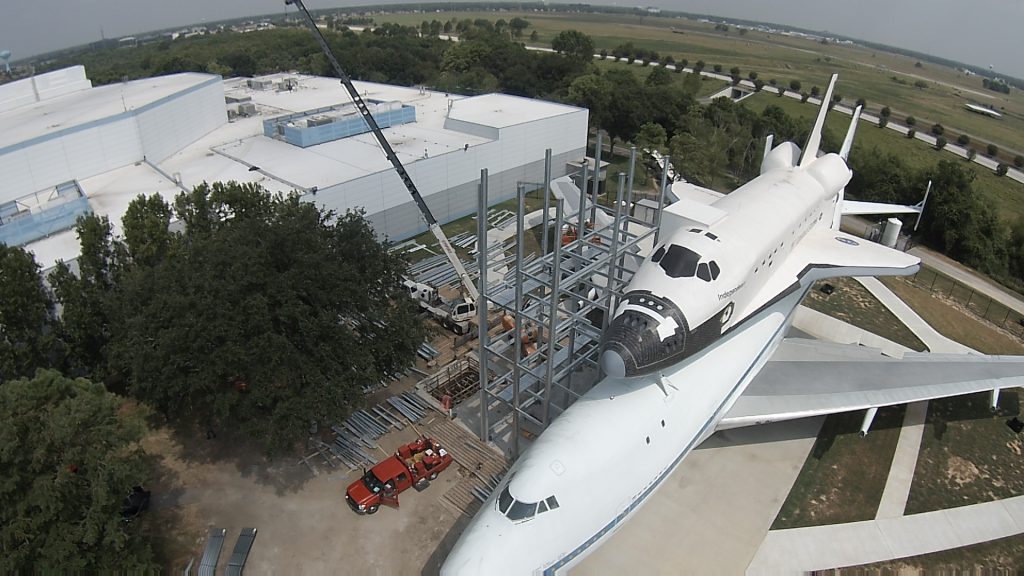 Shortly after the last shuttle mission landed in 2011, Space Center Houston acquired a 25-year-old high-fidelity shuttle replica. The science and space learning center was honored to display this reminder of the Space Shuttle Program.

A week before the new shuttle exhibit broke ground, Space Center Houston received a mate for its shuttle replica – the original and historic shuttle carrier aircraft NASA 905. Boeing engineers had never disassembled one if their jets outside a hangar. It took 40 days to take NASA 905 apart at Ellington Field.

The project’s challenges didn’t end there.

The original plan was to nestle the shuttle and SCA side by side. Could they be mounted permanently in the historic mated position? Innovation and ingenuity scaled all obstacles, creating a unique, exciting experience for guests.

Inside the eight-story, 5,500-square-foot structure, two elevators and a stairway provide efficient and ADA-compliant access to all levels of the aircraft, including the flight deck and mid-deck of the shuttle, as well as the 747 shuttle carrier aircraft. Open-air vestibules allow visitors to assemble as they wait to board each aircraft.

The plane now is a building. But, it doesn’t act like one. The afternoon sun heats the metal side, causing the front landing gear to move. Buildings typically don’t move. Summer in Texas is hot. The center found an innovative way to air condition the plane without changing the infrastructure of this huge artifact and providing visitors an authentic experience.

The shuttle interior was completely renovated. It was opened and enlarged to allow guests to experience all areas. Visitors can appreciate the cramped space astronauts shared for up to two weeks at a time. Inside the plane, guests see, touch and hear the story of the historic plane, NASA 905, from its life as a commercial airliner, through modifications and its ferrying missions. Interactive exhibits show guests the physics behind this impressive, improbable pairing.